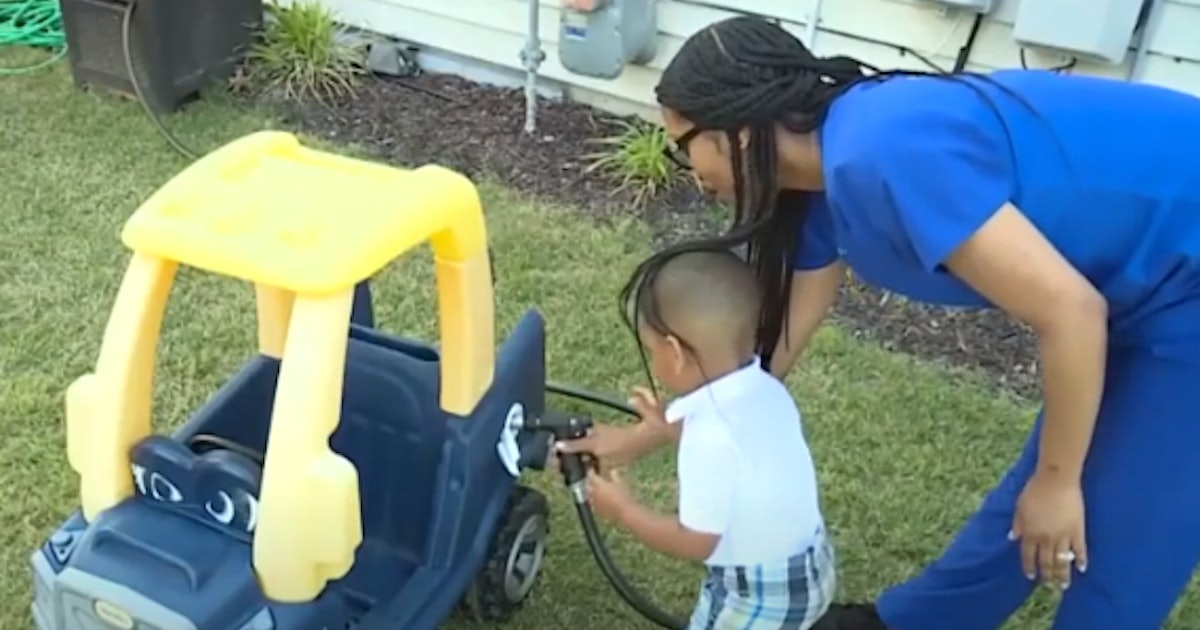 Perhaps in response to North Carolina Gov. Roy Cooper’s plea to avoid panic buying gas, 2-year-old Channing Monroe really got inventive. The toddler was filmed filling his toy car with ‘petrol’ from a garden hose, and don’t interrupt him as he takes his job very seriously.

North Carolina was struggling with a gas shortage since the largest fuel supplier on the east coast Colonial Pipeline was hacked earlier this week. Southeast states like North Carolina have been hardest hit, with Gas Buddy reports about 70% of gas stations sitting without fuel. People really freaked out. So much so that the US Consumer Product Safety Commission had to post a Twitter thread that read, “Don’t fill plastic bags with gas…We know it sounds simple, but when people get desperate, they stop thinking clearly.” They take risks that can have deadly consequences. If you know of anyone who is considering bringing a non-fuel canister to get gas, please let them know it is dangerous.

Luckily for little Channing, his car rolls on his little feet and good old water from the hose. His mother, Morgan Monroe, who is a nurse at Duke Raleigh, took video of her baby boy filling his cozy coupe with a garden hose. Dad Brandon told local media outlet WRAL that his precocious little boy had washed his toy car before but never saw him pretend to fill it up with gas.

It seems Channing paid close attention to what his parents were up to, as he insisted on gassing up his toy car after seeing his mom do the same thing that morning. “I have to be at work, so we went, we got dressed, we [to the gas station] before dropping him off at daycare. she told WRAL. “I was like, ‘oh my God, this is crazy!'”

A 2-year-old child filled his toy car with “petrol”.

Channing’s adorable video was a bright spot for thousands in an otherwise difficult time for North Carolina residents as they struggle to find gas to get to work and school , and his the parents were happy to share it. “I thought it would be really funny in the middle of this gas shortage crisis,” her parents told WXII12. “We thought it would be funny to send this photo – just to add some humor to a stressful situation for all of us.”

Now, if only everyone’s cars ran on water like Channing’s, wouldn’t that make life so much easier? Maybe that’s what Channing is ultimately trying to tell us with his video.