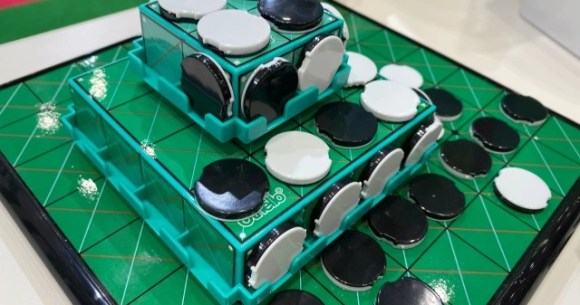 The script has been reversed on this classic game.

After a three-year hiatus due to COVID-19, the Tokyo Toy Show made its triumphant return to Tokyo Big Sight from June 16. Excited to finally learn what’s new in the world of toys and games, we sent our reporter PK Sanjun to check it out.

With the threat of the pandemic still lingering somewhat, this year’s convention was a bit more subdued affair, but it still featured Japanese toymaking greats such as Bandai and Takara Tomy. However, PK noticed that it was the Megahouse booth that seemed to draw the biggest crowd.

Megahouse is well known as the maker of the smallest Rubik’s Cube as well as the most difficult Rubik’s Cube. But that day they were showing their Kaitai Puzzles (Dismantling Puzzles). What started as a playful toy version of Tuna Kaitai Shows, where a whole tuna is sliced ​​up and served as sashimi, has expanded to a whole range of meats and now a series of “light” versions with a clove of garlic and a sea urchin.

Megahouse is also known as the official copyright holder of the game Othello, which often goes by the generic name Reversi. Contrary to its various origin stories and names, the game itself has remained rather simple for over a century at least, unless you count the truly underrated minigame in Ehrgeiz where you can play Reversi in real time while fighting shit like Final Fantasy characters.

However, in December 2021, Megahouse literally took gaming to another level with Othello 3D.

Most of the participants had their eyes glued to this game, and PK also stopped short at the sight of it. For him, Othello was a perfectly distilled game combining extremely simple yet extremely deep gameplay. Perhaps no other game would fit the adage “if it ain’t broke, don’t fix it” better.

Megahouse, however, dared to disagree and reinvented the game. PK asked the staff what was different, and was told that the basic rules remain unchanged: Players place discs on the board one by one and flip over their opponents’ pieces when surrounded by two opposite sides or corners.

In 3D Othello, two three-dimensional platforms are introduced on the board. These stages aren’t just cosmetic changes either, as their sides are also playable squares. This can create strange and conflicting diagonal routes, so Megahouse has simplified this by adding red and blue diagonal lines across the board. Pieces can only be captured diagonally if they are sandwiched along a line of the same color.

▼ A video explanation of the layout

The two different sized platforms can be placed anywhere on the board before playing as long as the colored lines are aligned. Placing them near corners and edges can dramatically change conventional strategies in these locations, as you can now place pieces on the very edge of the board, beyond the corner.

Not only that, but it creates blind spots on the board meaning you can’t easily play a full game of this Othello sitting in one place. It can also add a new dimension to team play, as well as a whole new set of challenges for those who feel like they’ve mastered the standard version of the game.

PK was impressed with this revolution at Othello, or “Othellolution” if you will. If this game could change after so many years, maybe everything is capable of changing. He then began to wonder if he should finally reconsider his uncompromising position that sandwiches are not in the same category as “baked goods…”

Photos ©SoraNews24
● Want to be up to date with the latest articles from SoraNews24 as soon as they are published? Follow us on Facebook and Twitter!
[ Read in Japanese ]