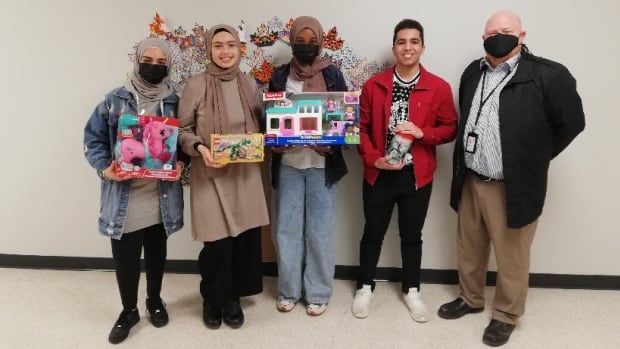 The annual Saunders Secondary School Toys for Tots donation campaign focuses on Ramadan and brings smiles to the faces of children in London’s Muslim community.

“Ramadan and Eid are a time of giving to those who are less fortunate,” said 12th grade student Bayan Saidam. “When we fast it allows us to be grateful for our blessings, so it really ties into the idea of ​​giving back to the community.”

The school’s Muslim Student Association has partnered with local business Beachcomber London, where residents can drop off or deliver toy donations. The students plan to collect more than 300 toys for children aged 3 to 16 and donate them to the London Muslim Mosque by April 26.

The toys will be collected throughout Ramadan and the mosque will distribute them just in time for Eid, which marks the end of the Islamic holy month which began in early April this year.

Jamie Clark is a teacher at Saunders. He said he came up with the idea last year as a way to bring unity and positivity to London’s growing multicultural community.

“We have a large Muslim population in our school and they are great kids. Every community certainly has people in need and the Muslim community is no exception, so we are doing what we can to help our fellow human beings,” a- he declared.

“Right now our students are fasting and not eating between sunrise and sunset. A lot of people don’t know this and it’s hard for some kids, but something important for others to know as well. “

A message of peace and enlightenment

Saidam believes this initiative is the perfect way to create an inclusive community and give people a chance to celebrate after two long years of the COVID pandemic that has halted most celebrations.

“The toy drive is open to anyone to donate and brings the whole community together, whether Muslim or not. It really feels like putting a smile on a child’s face and their family’s face,” he said. she declared.

“Traditionally we think about giving money to children and they usually go to a toy store with it, but those who are less fortunate don’t have that opportunity so it would be really nice to surprise them with a toy” , she added.

Clark hopes this toy drive can also help Londoners learn about the Islamic faith and the different traditions and practices followed during Ramadan and Eid.

“Ramadan is about positivity. The Muslim faith is very peaceful and positive, so I hope this sheds some light on people. People don’t know that gifts are given during Eid, so that’s good that we can also educate them. It’s a win-win for everyone,” he said.