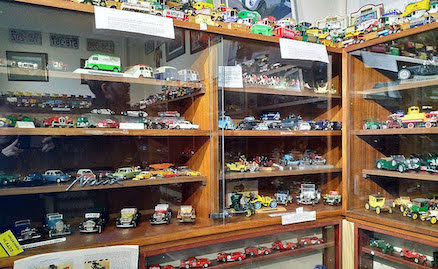 Thousands of small cars will hit the road this week to park in a new home at one of our favorite tourist attractions.

The Cloverlands Model Car Museum is moving, leaving its long-standing location at the Montgomery Institute for a new home at Llanfair Caereinion at the Light Railway terminus.

The move follows the sad passing of Gillian Rogers-Tomlinson over Christmas and the need to find larger premises for the growing collection. She had been building the collection for over 60 years as a car enthusiast and model maker.

She drove a Singer Le Mans for 40 years at racing events in Europe and was also a motoring writer, publishing her personal motoring story titled “Driving Through The Decades”.

The collection includes over 5,000 model cars from several collections, including one from Canada, 1,000 Grand Prix and touring cars and a fine collection of American cars.

“We are moving to the Welshpool and Llanfair Light Railway terminus with our 14 collections, some 5,000 designs, in time for Easter,” a collection spokesperson said.

“We welcome everyone, including classic car schools and clubs and others, with helpful and knowledgeable guides to show you around our great exhibits. Admission is free but a donation is expected.

Cloverlands has attracted around 2,000 visitors each year to its Montgomery site, but the move to such a busy tourist center will see that number increase significantly.

The need for a more accessible home was another reason behind the move which will begin today (Tuesday) with the packing of cars ready to move.

Montgomery Mayor Jill Kibble said: “We will miss you in Montgomery, but there will no doubt be many more visitors to your new home. Thanks for being with us for many years and all the best for the new business!”

The Cloverlands Museum was originally founded in a barn in the home of Gillian in Llansantffraid, who had amassed a private collection of some 1,500 model cars, some dating from the 1940s. Many of these had been manufactured by Gillian herself, including the original prototype of the car that would star in the children’s TV series. Brum.

As officers of the Montgomery Institute, Bruce Lawson and his friend Roy Marthews, who also died at Christmas, offered to display the collection. Miss Rogers agreed and the models were moved to Montgomery in May 2015.

Further acquisitions since then have made the collection the largest public collection in Wales and the second largest in the UK.

Although the Cloverlands Museum is not directly linked to the railway, the directors of W&LLR felt that there could be many benefits to having this additional attraction, and a program to accommodate it alongside Llanfair Connections is in the works. course of development.

Groom’s friend becomes the star of MAFS after taking on a toy store hating villain!