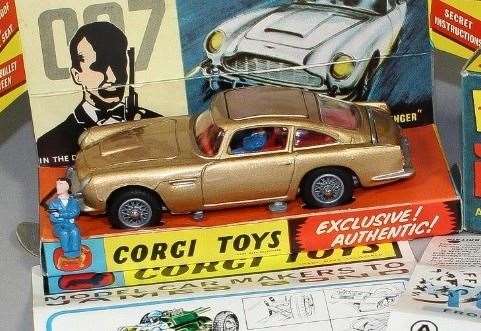 The Corgi 007 ‘Goldfinger’ Aston Martin DB5 was on the Christmas wishlist of millions of James Bond movie fans.

It came with some of the exciting goodies of the real car – including a working passenger ejection seat.

But like many toys of the time, the ‘Secret Service’ box and papers were quickly crumpled up, torn and thrown away, the ‘passenger’ ejection figure was lost and the car was scratched by numerous collisions.

Now the original version has become a collector’s item, with the best copies – complete with box – fetching high prices.

So when a ‘nearly new’ car with box and papers went up for sale at the Canterbury Auction Galleries last month, experts had no problem valuing it at £200-300.

But bidding was fierce among collectors and the hammer eventually fell to £720 plus the 27% buyer’s premium.

Its original price of 10 shillings is equivalent to around £9 in today’s money, which means it has increased by 8,000%.

Corgi won the top Toy of the Year award in 1965 for his Goldfinger James Bond Aston Martin DB5.

Also provided in the box in a hidden compartment were the “owner’s top secret documents” and a 007 lapel badge.

The company has produced later versions of the Goldfinger Aston Martin, – the last 50th Anniversary Edition in 2014 which was a sold out – but none are as desirable as the original 261 model.

Some medical debts are removed from US credit reports