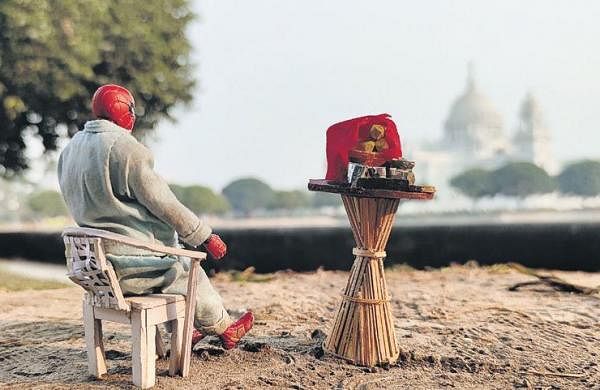 How would you react if you saw Spider-Man at New Delhi Railway Station? Or Professor Calculus, from The Adventures of Tintin, waiting in the streets of Delhi to hitchhike? While you may not (yet) witness these visuals in real life, you can definitely spot them in photographs captured by Sainik Farms resident Surojit Dev (42).

The commercials producer has mastered the art of capturing realistic photographs of toys and miniatures in urban settings. Avid GI Joe and Hot Wheels fan, Dev started the business in 2017 – he calls it Toy Tales and has both a website and an Instagram page (@toytalesofficial) – while interacting with his son during break. “One weekend morning, my son and I were playing with his toys. That’s when I started clicking pictures on my phone’s camera,” Dev mentions.

Toy Tales is Dev’s way of infusing the mundane with a bit of magic. A one-man army, he uses his son’s toy and miniatures to capture images in open locations around Delhi, Kolkata, Mumbai, among others. “These shoots bring out the child in me. I mix the story of a toy with the real environment and create a story through that visual imagery,” he explains.

Mixing the mundane with magic
If you happen to stumble upon the Toy Tales Instagram page, you’ll find glimpses of Tony Stark endorsing “desi engineering”, various examples of Hot Wheels cars on the streets, and other essential everyday moments that have been captured in such a way that they bring to life the perspective of a toy.

His photograph of Thomas, the tank engine, carrying Afghan refugees is particularly interesting; it shows a number of refugees sitting atop the classic Thomas & Friends cartoon. However, unlike most cases, this time Thomas seems sad, probably thinking about the plight of these refugees. “With the characters above Thomas, I also tried to emulate the emotion of the score when people from Bangladesh and Pakistan had to sit on trains to go to India. He had to to be the same for the Afghans. I wanted to show how India was helping them by sending a special train,” Dev shares.

Other than that, it also features light storylines such as where Spider-Man spars with Iron Man. Titled “Getting Trained by Dad,” the photograph references an overweight Spider-Man, who lost his job during the pandemic, and is trying to get back into shape. The image – it shows Iron Man overseeing Spider-Man’s training – is also a reference to how the latter sees Tony Stark as a father figure.

No child’s play
“My idea is to show the daily life of Indians through these toys. If I have a given set of toys, I try to fit a story. If I had to create toys for every story I did, I would have to create a factory,” Dev says. However, he occasionally introduces a few handcrafted paper or clay figures created by two people he employs.

Dev also mentions that outdoor photography is nothing short of a challenge. Recalling a shoot he did at Howrah station in Kolkata, he tells how he was robbed by young children because they were fascinated with the toys. He adds that apart from minor glitches, he has never encountered any obstacles.

Build a community
Dev was even asked to do a series of photographs in the form of a micro-story for Comic Con India-Delhi 2018, which featured the Night King, Game of Thrones’ first White Walker. Ask him how he wants to take this business forward, and Dev concludes, “The intention is also for photographers and filmmakers of different styles to offer their perspective on shooting toys. Imagine a food photographer taking pictures with food and toys. It will be such an interesting concept.